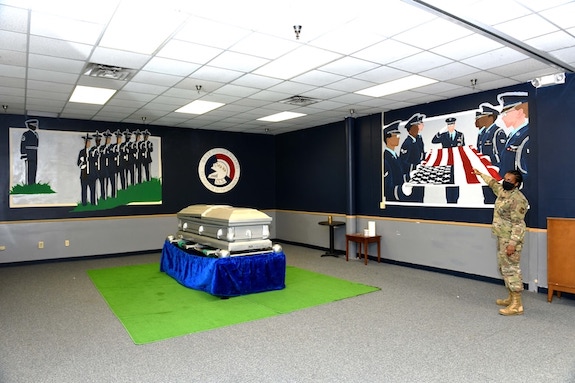 The Honor Guard at Robins Air Force Base, Georgia, added a mural to their walls to honor past and present members.

The five-panel collection, which is located in their training room, shows the sequence of events that occur during an active duty service member’s funeral. The artwork encompass a 20-man honor guard team.

“We wanted to create the effect of the team members popping out of the frame,” Staff Sgt. Shykana Copeland, Robins Honor Guard flight sergeant and trainer, said.

Copeland worked with a previous flight sergeant who had come up with the idea for the mural.

“We discussed the types of graphics we would like to see that complemented the original firing party mural,” she said. “We decided to add the teams associated with the full active duty sequence.”

The murals pay tribute to and honor the legacy of those who have volunteered to serve as honor guard members throughout the years at Robins.

“All these guys you see in the murals are actual Airmen who have served in the honor guard over the past two years,” Copeland said. “I want the teams that come through to recognize familiar faces when they look at the murals.”

Copeland said they spent a lot of time painting them and wanted the Airmen to see the whole picture.

“They have a big impact on me, because I watched the whole thing come to fruition,” she said. Hopefully they have an impact on younger flights. I have a lot of pride in them, and I hope they do too.”

Less than a month away- Support Our Troops- Care Packages 2021